We’ve been living in Sofia for  about three weeks now and its been a nice refreshing recharge so far. Going into Remote Year, I knew I would love my first three months traveling through Croatia, Czech Republic and Portugal but I wasn’t sure how the next two would shape up in Bulgaria and Serbia. Before the trip, I wouldn’t have been able to tell you where Bulgaria was on the map or that the capital city is Sofia. In fact, I didn’t know one thing or fact about Bulgaria. I don’t think I had ever even said the word. Because of this, I naturally had no expectations for the country or the month in general. Sometimes, it is better going in without pre-conceived notions or conceptions and just take the new city and country as it is. I’ve been pleasantly surprised by my time here and am really glad I have the opportunity to spend the month here.

The city of Sofia is at the base of the Vitosha mountain and the mountain provides stunning views from around the city. A central promenade divides the city with restaurants, bars and shops on either side. There are many outdoor parks and green space where many of the locals gather to hangout during the day. It isn’t the most beautiful city so these green spaces help brighten it up while walking around. Bulgaria was communist until the fall of the Berlin wall in ’89 so you can tell the city has gone through a big revitalization in the last thirty years. Lots of foreign investment has come in as you see many familiar brands and the malls, shops and restaurants all look relatively new. This is in contrast to the neighborhoods where our apartments are, which are older neighborhoods in bigger run-down looking buildings. Almost all of our apartments have been recently renovated so while the buildings don’t look the prettiest from the outside, they are quite nice on the inside. 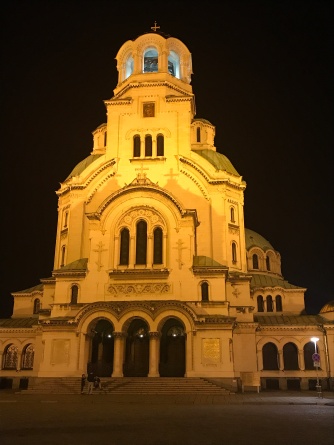 The city of Sofia has a pretty interesting history. It was a big stop in Roman times for travelers getting from the capital of Constantinople (Istanbul) to present day Belgrade in Serbia. While they were building out their subway system, the workers stumbled upon Roman ruins and now you see the old ruins scattered throughout the city. In fact, on my way to the workspace I walk over an ancient Roman road which is cool to think about. It was conquered by the Ottomans after the Romans and has an interesting religious background. In one central square, there is a Mosque, a a Synagogue and a Catholic Church all within a few minutes walk from each other. During World War II, the Bulgarian leader saved hundreds of thousands of Jewish people living in the city from Hitler and his demands. The story goes, the Bulgarian leader kept telling Hitler he needed the Jewish workers to finish a project and kept pushing the due date back. So much so, that eventually the war ended saving the Jewish population. After this, the country was under communist Russia until the fall of the Berlin Wall. I never knew Bulgaria was in the middle fall of this political and religious drama but it was certainly interesting to hear about.

Going into this month, our fourth, most of the group wanted a relaxing month, catching up on work and being more active. The first three months were a whirlwind as we went from meeting everyone for the first time, to living in action-packed Prague, to walking through the sunny Lisbon streets. Since no one knew much about Bulgaria, most of us planned to have a relaxing month. Sofia has been the perfect city for this as it is a very active city with great weather so far. Remote Year has provided us with a fitness card that we can use to do everything from tennis, ping pong, yoga and swimming. I’ve been making a conscious effort to be more active this month and it has allowed me to reset a bit.

The focus on outdoor activities has already been great this month. We woke up early one Monday morning and took a beautiful hike to an open view of a lake below. Afterwards, we all did the traditional nude hot spring bath that many Bulgarians partake in. A group of 25 of us also went camping which was an amazing experience. We all camped out in a secluded field with a beautiful view of the mountain as our backdrop. We cooked our dinner over an open fire, sang campfire songs and cooked s’mores. It was awesome giving our Bulgarian city team their first s’more and the seeing the look on their face when they bit into it the first time was priceless. It was a great time to just hangout as a group and get away from technology. We were up all night laughing and singing and it is nights like this that continue to bring the group closer.

Bulgaria is one of those places I would’ve probably never visited but so glad I did. To be honest, I wouldn’t recommend anyone visit Sofia if they are just coming for a few days. It sounds a bit odd, but it is better to live here than just to visit. The reason is because there isn’t a whole lot to see and many of the fun nature activities we have done take up a whole day. Since we have 5 weeks here, it has allowed us to form a nice routine while leaving plenty of time for day and side trips. Most things are within walking distance so you see more fellow Remotes at the workspace or out and about. Even though the city has a population of over one million it certainly feels smaller than that as it is common to see someone familiar on the way to the workspace or the store. This has been my first experience with Eastern Europe and I have really enjoyed it. It is relaxed over here and even though Bulgaria uses the Cyrillic alphabet (think Russian characters), it hasn’t been too tough getting around. The face is, even way out here many people still speak enough English. When I first got my Remote Year itinerary I was expected to see Paris, London, Barcelona but now I appreciate the cities I have lived in and am going to be living in. I can always go to those more famous cities so sometimes it is nice to live in a totally unexpected place and learn about a culture I otherwise wouldn’t have known about. So cheers, Sofia thanks for a great month so far!

One thought on “I’m living where? The hidden gem of Sofia, Bulgaria”