I had grown accustomed to seeing the ocean every day while living in Charleston. It was a short two blocks away and I’d walk down to it every morning before work. When I decided I was going to move out to Phoenix, I knew I’d be giving up my ocean views but I didn’t anticipate how quickly I’d miss it. Just a few weeks into living in Arizona, I decided to take a last minute trip to San Diego for the weekend to remind myself a bit of home by seeing the ocean. I texted a buddy from college who lives there and he had an open couch for me to sleep on so the decision was made. I didn’t have any other expectations for the trip other than seeing the ocean and spending time with a buddy who I hadn’t seen in a few years, maybe have a fish taco or two.

My family and I vacationed to San Diego several times growing up and I always loved it and considered it one of my favorite cities in the US. This would be the first time I was going in my adult life so I was excited to see the city from another perspective. From Phoenix, the drive is only five hours but it is certainly a unique one. As you leave Phoenix and head south, you leave the valley surrounded by mountains and head into a few hours of nothing. After driving for a bit and changing direction to West, you head straight for the Mexican border and the city of Yuma. Just past Yuma the landscape changes to the desert. Huge sand dunes line either side of the highway and it doesn’t even look like the US anymore. I had no idea we had a desert environment like this here so it was certainly something to look to break up the drive. After driving a bit longer and going through a few border checkpoints, you enter California. At this point, I thought I would slowly wind our way down the beach but I was surprised to find out that my car kept climbing and climbing until we were at about 5,000 feet elevation. At this point, the landscape was extremely rocky and huge boulders lined the road. From the apex, San Diego is a straight shot down just an hour longer. You spend over half of that winding your way down the mountain and are immediately greeted with the outskirts of the city. A little while longer and you’ve hit the Pacific. It was a very unexpected type of drive but a very unique and fun one for people who haven’t done it before.

I arrived around lunchtime and my friend had to work until about 10pm so I was on my own. We were staying in Ocean Beach which ended up being the perfect spot for me. I parked my car, put down my bag, and was excited to find the place we were staying at was just a few blocks for the ocean. I immediately walked over to it and sat on the cliffs overlooking the waves crashing below. I had been in San Diego for 5 minutes and already had half my to-do list checked off. I walked into town which was just a few blocks further and instantly loved how the Ocean Beach neighborhood seems to be stuck in the 80s. It has a very laid back, beachy vibe and seems like the place hasn’t changed in 30-40 years. The “town” part is 3-4 blocks long by a few blocks wide and it is littered with casual spots to grab food or a drink. At the end of the main street is a big pier and of the course the beach. I found a great little taco shop and ordered a few fish tacos. They were incredible and it was just what I needed to fuel my day. I walked down to the beach to hang out for a bit and I already deemed my trip successful – this was the exact place I wanted to be for a long weekend.

The area was also home to several breweries so I hopped into a couple and tasted the local fare. I noticed on Instagram that an old friend was in San Deigo so I messaged her to see if she was still in town. To my surprise, she not only lived there but was dating someone I knew from a different friend of mine back in college. It was just by coincidence that I knew both of them and so we made plans to meet. I was already happy as could be sipping on a beer when my two friends, Kelsey and Seth, picked me up to watch the sunset overlooking the cliffs. The view was incredible and it was the perfect place to watch the sunset and seemed so “California”. All of a sudden, Seth pulls out a beer and I couldn’t believe my eyes. It was the beer I’ve most wanted to try in the entire US. This beer doesn’t get shipped out east, has a huge cult following for being one of the best, and he’s just casually got one for us to drink as we watch the sun disappear over the Pacific horizon. This day really couldn’t get much better since instead of walking around by myself, I was hanging out with two old friends and catching up. They mentioned they were having friends over for dinner that night and so I now had my plans for the night. 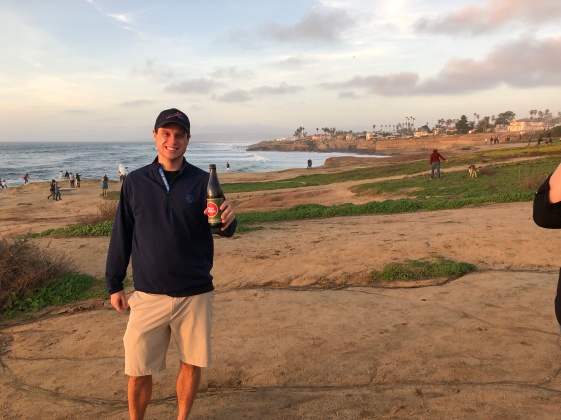 Many people that know me might consider me a beer snob. I track all the unique beers I drink on an app, have checked in over 1,800 of them, and rarely get the same beer twice. Little did I know, there was a subculture of beer drinkers that were 100x more into it than I. The dinner party that I was just invited to was really a beer share party with tons of industry experts that brought over the rarest of the rare beers to share. I learned there was a really exclusive beer festival the next day so several people flew in for it and brought some of the best stuff they had from their respective parts of the country. Over the next few hours, I sampled tons of crazy fun beers and met some really great people. Many of the beers were styles I had never heard of and I quizzed many of these new friends with questions as I sampled them. I learned a lot, ate some really good food, and wrapped up a picture perfect day in San Diego. It was funny to me that I did all this without even seeing the person I was visited yet. 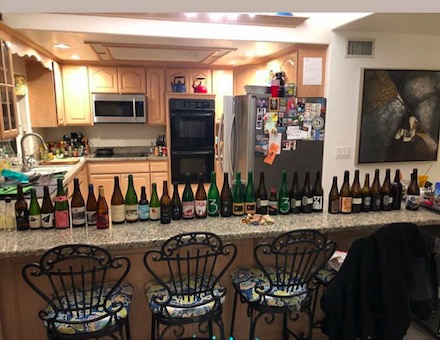 The next few days were more of the same as my buddy and I walked around the Ocean Beach neighborhood popping down to the ocean, a new brewery, or a restaurant as we saw fit. Everything you need is just a short walk away so we didn’t bother trying to explore too many places. It was really fun to catch up and just have a chill weekend with no set plans. We saw some live music, checked out a few local spots, and tried the famed peanut butter shot served at one of the bars. After a great weekend, we ate a good breakfast Monday morning, I went down to the ocean one more time, and just as quickly I was on my way. I told my friend I’d be back soon as there were a few areas I would’ve liked to check out but there’s always a next time and for me, I hope it’s soon.

One thought on “Getting my Ocean Fix in San Diego”