I left Atlanta at 6 pm on Sunday and woke up in Amsterdam 8am on Monday. I pre-bought my train ticket so I was able to half sleepwalk through customs and onto the train that takes you from the airport to the city center. As I leave the train and head toward the city, I hear my name being called out behind me. I turn around and low and behold I see a familiar face from Charleston. Marissa, who now lives in Rotterdam, was in a few of my Spanish classes in college and was able to see me through the crowd. She was in a hurry and on her way to work but it was very reassuring to see a familiar face as soon as I entered this new city.

Outside it was cold, windy and rainy. I had no data to use the maps app on my phone so I just started walking hoping I’d somehow run into my hostel. I found a tourist shop that gave me a map and circled where I was going. A few minutes later at around 8:30am, I showed up to my hostel. “You’re early”, the receptionist said but you can leave your luggage here. Come back at 2pm. I didn’t sleep too much on the plane so I figured I could walk around for a bit and then come back at 2 and take a nap. I went to a tourist shop and bought a 24hr hop on hop off bus and boat tour. It is probably the most touristy thing you can do but I was half asleep, it was cold and it was rainy so the idea of sitting down and taking in the city appealed to me.

First was the bus. From the top deck of the double-decker, I was able to see the city through the rain droplets on the windows. The English audio tour gave me some background history of the area and the city sights. The huge bus weaved in and out of traffic and down narrow alleyways flawlessly as I continued to be fascinated by the architecture and the canals. After 11 stops on the bus, I felt I knew the basic layout of the city and was ready to hop on the boat for the canal tour. From the canals, you look upward at the city. Houseboats line the canals as you begin to wonder what it’s like to live on the water like this. They all have heat, electricity and plumbing but you can’t move your boat or your spot will be taken. I got off the boat just as it started raining hard and finally made it back to my hostel for a nap.

After my nap, I woke up to a new person in my hostel.His name was Manuel, from Northeastern Italy. He was a big fan of the NBA, especially the Houston Rockets, and metal music. After a quick history lesson learning that Slovenia borders Italy I was off to walk the city with my new energy. I took a right out of my hostel and began walking until I saw something that appealed to me. I saw some beer taps in the window and decided to walk in. I had a nice draft beer as the bartender told me which way I should travel next. I walked for a bit more before the aroma from a coffee shop enticed me. I walked in, ordered a reefer (joint), a water and sat down to relax. The shop reminded me of a local coffee shop in the states just with a slightly different aroma in the air. People were reading, writing, chatting with friends, sipping on cappuccino under a backdrop of music from bands like Grateful Dead, Talking Heads and the Animals. The environment was calm, welcoming, warm, non-judgemental and was a great place to stop and hangout for a bit. After the smoke, I asked the manager where I should eat and he told me to walk down the alley and take a left.

The restaurant I walked into, Haesje Claes, had a homey and welcoming feel. The waiter instantly gave me an English menu and brought me the draft beer of the day. I sat next to the service station so many of the waiters would walk by and talk to me. They were all extremely friendly and were curious about what types of beers I liked and where in the States I was from. I ordered the Stampotten, which is Dutch comfort food. Brussel sprouts mixed with mashed potatoes with a meatball, slab of bacon and sausage all on top. The whole dish was slathered in a brown gravy with pickles and mustard on the side. It was delicious and just what I wanted to have an authentic meal while escaping from the cold. After dinner I took the long way home and went back to my hostel to sleep. 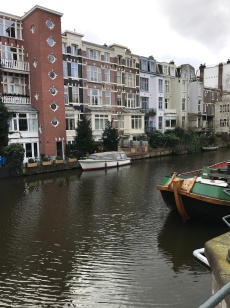 I woke up on day 2 a bit later than I expected as I was trying to catch up on sleep. I went to a bakery around the corner and got a delicious Everything Bagel panini with cheese, ham, bacon, salami and hard-boiled egg. I ate this as I meandered my way through the city. It was a quiet Tuesday morning with not too many people out. I enjoyed seeing the city like this as it was calm and relaxed. Everyone seemed to be content with where they were and where they were going. No one seemed to be in a rush. After about a 30-40 minute walk I arrived at my destination, the Heineken brewery. I walked through the museum and had a couple pints. It tastes a bit smoother than it does in the States and it was a good start to the day before I went out to bear the cold again.

After the brewery, I went to the famous (I AMsterdam), took a picture and walked through the Van Gogh museum gift shop. At the time, the surrounding neighborhood looked more appealing than the crowded museum so I continued to walk. As I walked in no particular direction with no particular destination I stumbled into a quiet café. I saw an “IPA” on tap and wanted to taste a European one. The beer in itself was not great but the owner was a very nice lady who I struck up a conversation with. She was born just down the street from the café and lived there for most of her life until she had kids. She now commutes into the city, but now that her kids are older (21 and 27) she wanted to move back to the city center with her husband. Like many cities, she said her 3 story house with a yard in the suburbs would barely get her a 1-bedroom apartment in the city. She was surprised when I told her I had never been to Las Vegas and I was equally surprised when she said she had never been to Berlin. Having both lived in tourist cities (Charleston for me) we talked about how we had never been to many of our own cities tourist attractions since when you leave there they seem less appealing. She was a pleasure to talk to and since I was the only one in the café, she didn’t seem to mind. As I was leaving, I asked her where I could find a coffee shop and she pointed to the left.

I walked into the coffee shop and got a reefer and a cappuccino and sat down. Now I rarely, if ever, smoke in the states but since I was here I figured I might as well check out a few different places. It was nice to put my feet up and relax as I sipped my coffee. After my drink and smoke I took off again hoping to head toward the city center. After crossing a few canals, I saw a little bar with about 20 beer taps in it so I walked in. I ordered a nice local beer and sipped it while I overlooked the adjacent canal. Now, many people enjoy going to the museums to see the art and I get that but to me, these bars and coffee shops are the museums I enjoy going to. I won’t see a famous painting but I get to experience a bit of the local culture and talk to some local people about the city they live in. I feel you can tell a lot about the culture of a city by sipping their local beer and talking to the local bartender. It’s not everyone’s preference but I love it.

I left the bar hoping to head back toward the city center. 15 minutes in the wrong direction I realized I was heading the wrong way and retraced my steps up through the canals and crowds of bike riders. On a recommendation from a friend, a found this little cookie shop by an alley way. I had one of the cookies and it was one of the best I’ve ever had. Fresh out of the oven, it tasted a bit like a brownie with an icing center. I noticed a craft beer store that I had seen yesterday and walked in. It reminded me of the store I used to buy my beers at in Charleston. I nondescript store with tons of beers for a cheap price. Many were sold as singles so I was able to find one that interested me and I bought one for the walk back. I found a landmark I recognized and headed back toward my hostel to relax a bit.

Next, I checked an instagram message from a college friend who was just in Amsterdam a few weeks ago. He mentioned I should check out cafe Hoppe, so I looked it up and headed that way. The cafe was established in the 1600s and had an old school feel to it. I ordered two beef croquettes, a beer and had a nice dinner. After dinner, I stumbled upon a beer bar with over 40 taps. I walked in had a few beers and met some Americans from Colorado Springs. After the bar, I walked around a bit and headed to bed as I had an 8 am train to Paris the next day. Farewell Amsterdam, I loved your charm and canals.