July has been a wild month travel-wise. I moved to Serbia and got to enjoy the city for a week. Next, I was on a plane heading back to the states for 10 days. I spent 4 days in Atlanta, 5 in Charleston and 1+ traveling. Because of flight delays, I didn’t end up getting home until about midnight Tuesday night ( left midday Monday) and was heading off again early Friday morning. The destination of this weekend side-trip was Budapest, just a four hour drive from Belgrade. Budapest, like Prague, is one of those Eastern European cities you have to go to. Everybody has positive reviews for it and I have really wanted to go since I missed out on going my second month while in Prague. After it took me 31 hours to get back to Belgrade from Atlanta, I really didn’t want to take a plane again so soon. After our 12 hour train ride to Istanbul, I tried to steer away from another long train ride. The next logical option was to rent a car and that is what we did. It was only a 4 hour drive without traffic and renting a car was cheaper than a flight and not much more than a train ride.

July has been the month of constant traveling for the group. Because of this, the side-trip was just two of us, myself and my buddy Yun. We set out Friday morning and headed north toward Budapest. The drive was great because the Serbian and Hungarian countrysides are beautiful. Field after field of bright yellow sunflowers, corn fields and wheat fields. Along the way, small villages speckle the view as the sun chased us up the road. We crossed over the meandering Danube a few times heading from one capital city on the river to another. With the street signs in kilometers, it felt like we were approaching our destination much faster than a normal drive. A mostly painless stop of 30 minutes at the Serbian-Hungarian border and we had reached our halfway point. Now, in a new country our phones didn’t work so we put on some podcasts and I looked out at the window trying to count the rows and rows of sunflowers I had now been accustomed to seeing.

Four-ish hours later we had arrived at the hotel. Since this was a last minute trip, a nice hotel was similar in price to an AirBnB so we went that route after a recommendation from a fellow remote who had stayed there the previous year. The hotel was called the Boscolo and inside was the famed New York Cafe. Originally a headquarters for New York Life Insurance, the cafe became a hotspot for writers, poets and artists in the early to mid nineteen hundreds. The hotel was very nice with marble floors, high ceilings and Italian paintings of angels and cherubs on the ceiling. It was bought by an Italian hotel company and restored about 20 years ago. 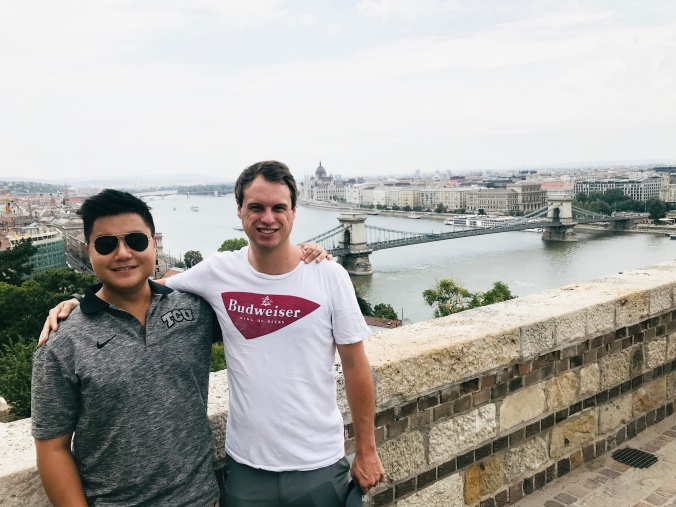 It was Friday around lunchtime so we set out to find lunch and a place to work as we both needed to check in with the office for a few hours. We were lucky that a Remote Year group was living in Budapest for the month so we knew there was a workspace we could work at that afternoon. He headed that way hoping to find a cool spot along the way. Just around a corner, I poked my head into an alleyway that opened up into a big courtyard. I figured we’d check it out and it ended up being a really cool bar/restaurant/club with a huge outdoor space and some other sections and bars inside. We sat down, ordered a Gin&Tonic and took in the site. A huge mural of a whale covered the entire wall as colorful lights were strung down over the garden. A litter of multi-colored tables and chairs provided a place to sit and we had the place to ourselves. 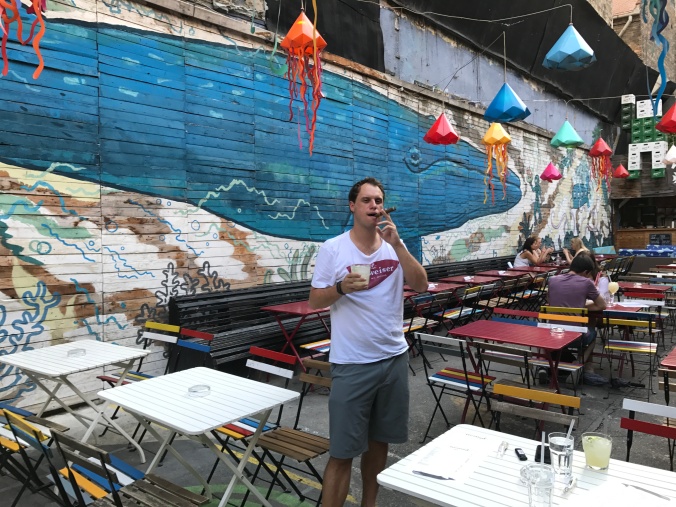 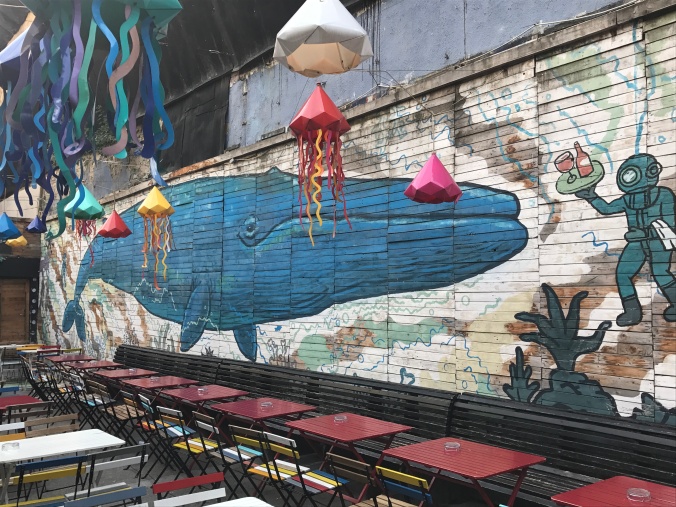 This place seemed like the ideal place to work so we ate lunch and checked up on our emails. Yun had some calls to take so we decided to check out the workspace so he could get a call room for a few hours. We found the workspace and were happy to find some fellow Remotes working that Friday afternoon. The workspace was a great and felt “familiar” since we kind of view Remote Year as one giant community sharing resources and workspaces around the world.  After our work, it was off to a rooftop bar. The rooftop bar had an amazing view of the city and we got up there just as the sun was beginning to set. The rooftop was packed with people and it seemed like the place to be on a Friday afternoon. Misting fans blowing to cool us off, a couple of DJs playing music, views of the Buda Castle, the Parliament Building and the rest of the city, and a cold drink in my hand – life was good. Rooftop bars in Budapest seem rare as this was the only one I could see within view site. From the top, the city reminds me a lot like Prague with the orange-red terra cotta roofs and multi-colored buildings. Similar to Prague, there is a lot of distinct architecture that helps bring uniqueness to the city with grand old buildings next to older lack-luster buildings like most European towns I’ve seen. The historical buildings are very grand while the rest are very simple and not too many modern buildings have begun to poke through which keep the character of the city.

For dinner we went to a place called Menza which was high recommended. There was a bit of a wait so we sat down at the bar and had a drink. After a few minutes the two guys next to us recognized we spoke English so we began to chat. Like many conversations on the road they begin with where are you from and what are you doing here. We say we’re from the States and we’re just here traveling for the weekend – pretty standard. When our next comment is, ya we’ve been traveling for 5 months and have 7 more to go, that’s when the real conversation begins. To hear a bit more detail of these types of conversations check out my blog HERE.

Dinner at Menza was delicious and super cheap which always helps. I can’t argue with seared duck breast over mushroom risotto for $12. It tastes every bit as good if not better than the $25 version I could have back home. After dinner, we went to explore one of Budapest’s most famous sites, the Parliament Building. To me, it is best to see at night as the lights make the building look even more luxurious. It is a massive structure at least 2-3 blocks in length and 1 block wide. It is situated right on the river and is one of the only buildings I can recall where the picture almost looks better than the real thing. I’m not sure if this is by design but the way a camera picks up the light makes the building look even more spectacular. Earlier that day we got scammed by a cab driver and since we don’t have phone data we decided to walk the hour or so back to the hotel, stopping for a drink on the way. 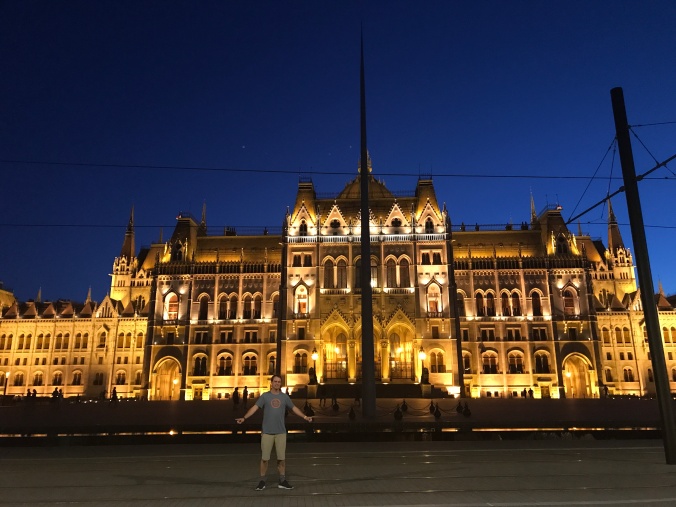 The next day we went over to the Buda side of the city. Budapest was actually two cities, Buda on the west, Pest on the east separated by the Danube river. Most of the sites are in the Pest side, where we stayed, but the Buda side has the castle, the citadel and fisherman’s bastion. The castle had an amazing view of the city. On the other side of the river, huge rocks jet up allowing the castle and citadel to be built high up on top. Standing at the top, you get a great view of the river and the city below. Adjacent to the castle is a really old-looking town and we walked through. There is a huge church and several statues that make up the fisherman’s bastion and it was a great site to see. The views are similar to the castle just a bit further down and it brings you back to a simpler time as you look at all the old buildings and shops. At this point it started to rain so we headed over to the market and skipped the citadel. We thought the market was going to be a big covered food court with many different food vendors. It was more like grocery market with many vendors selling meats, vegetables and spices. The top floor was covered with vendors selling clothes, souvenirs and the sort. 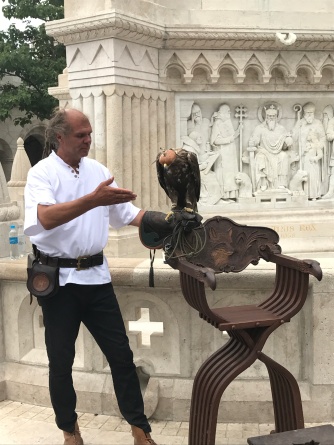 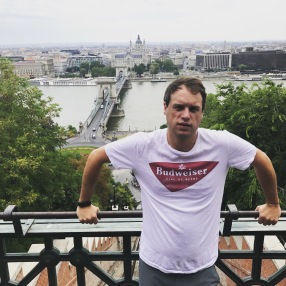 After our morning, it was time for me to find some craft beer so I searched my map and we set out now that it wasn’t raining. On the way to the spot I had on my map, Yun noticed a place called Beer Point and we stopped in. They had 16 beers on tap, many from Hungary so we decided to hangout for a while. It was early afternoon so we were pretty much the only people in there so I was able to sample all the beers and talk to the bartender about the local beer scene in Budapest and Hungary as a whole. Like many other Balkan countries, it is a fairly new craft with micro-breweries popping up over the last five or so years. The beers were great and they had many different styles which I appreciated. Sitting down and just talking beer with bartenders at these brew-pubs in different countries is still one of my favorite things to do and I seek it out everywhere I go. While sipping on a good local beer, you learn more about the city, its people, the economy, the political situation and many other things. Seeing craft breweries popping up signal many things that lead to good conversations with the locals. For one, if people are drinking craft (more expensive) beer the economy must be doing better, if it is easier for new breweries to pop up it is a good sign that the political situation is relatively stable and it is a good time to start a small business. From that you learn about the people, especially in my generation since those are the people usually working at the brew-pubs. You get to learn about their perspectives on the city and their views. I, without prior knowledge of the country, have no bias so I’m able to ask questions that seem simple but lead into much deeper conversations. “What do young Hungarians think of growing tourism and increasing prices in Budapest? Are there many opportunities for work here once you graduate college? How has the city changed in the last ten years and where do you think it will be in the next five?” I ask many of the same questions in the different cities I visit and always get back honest and interesting answers.

After a few pints and a good chat, we went to another craft beer bar, had a pint there and headed back to the place we got lunch the day before to smoke a cigar. A cigar and a few cocktails and we were ready to get on with our day. Dinner that night was at the famed New York Cafe. I had the perch which reminded me of eating with my Grandma in Chicago as that was always what we got when we went to visit. No matter where you are, its always good to keep some of your family and memories with you so you don’t forget where you came from and the reasons for traveling. 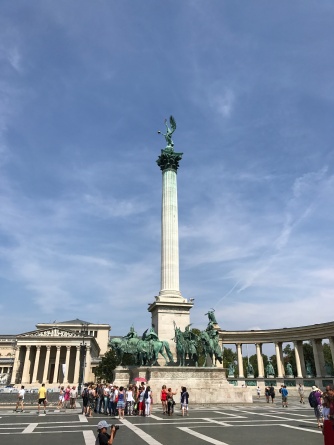 The last day we went to the famous thermal baths and hit the road, getting back to Belgrade around 8pm.